HOW TO RVING BLOG

When I was a kid my parents had a book on the shelf – “The Most Scenic Drives in America” by Reader’s Digest. I used to take it down and look at it all the time. I don’t remember a specific drive that I longed to take, but I remember the whole idea of road trips and going places that were so different from where we lived. Somehow I got possession of that book and it is still in my office today. I pulled it down recently and was surprised by how many of those scenic drives I had already taken, mostly on the east coast. This summer I had the opportunity to travel to what has often been listed as one of the top ten scenic drives not only in the USA but in the world, Going-to-the-Sun-Road in Montana. 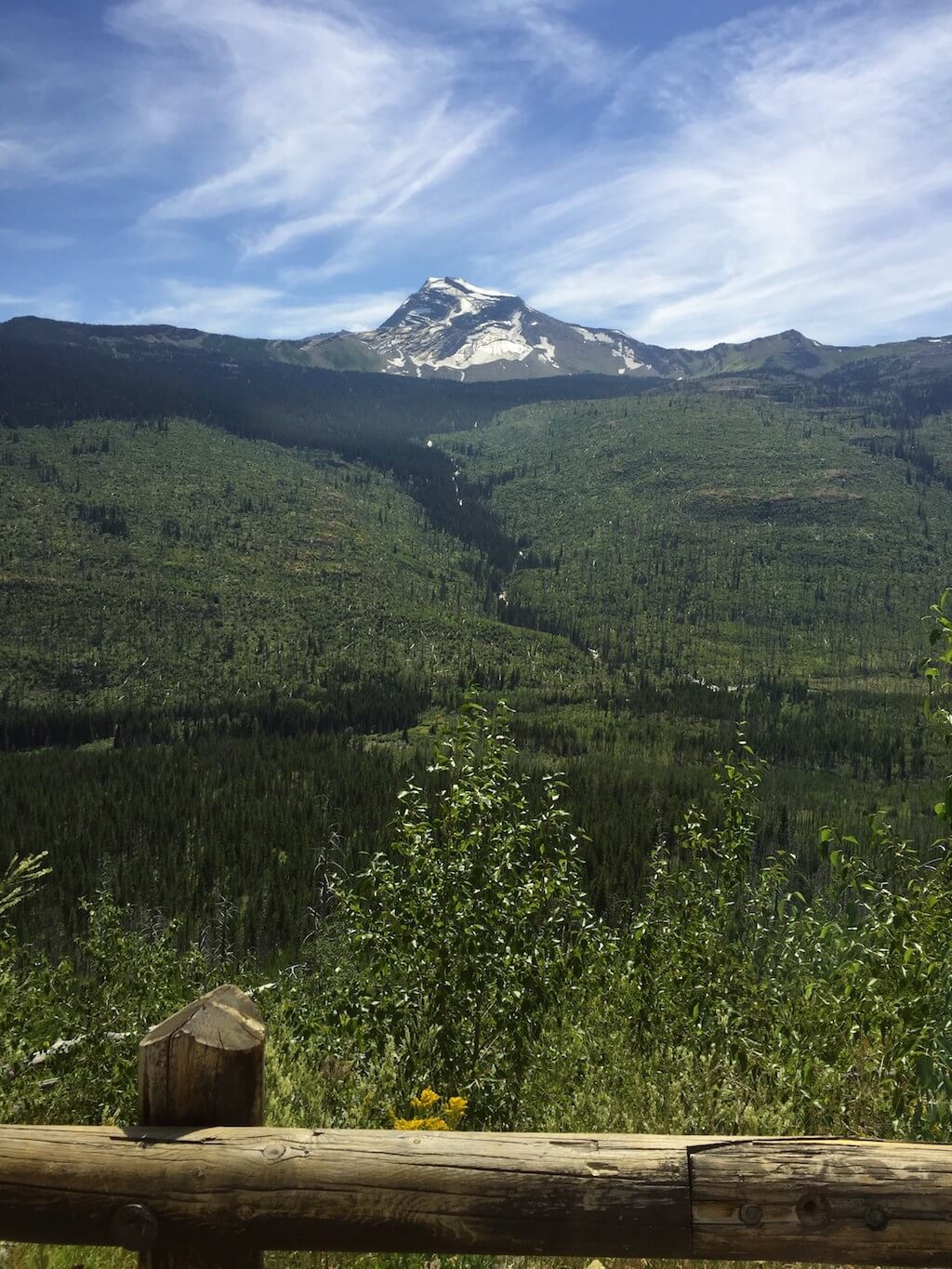 Going-to-the-Sun-Road is the fifty mile drive across the mountain tops of Glacier National Park in Montana. Construction on it began in 1922 as part of the National Parks Service Projects aimed at making the nation’s parks accessible to the newly emerging automobile tourists. The road itself is an engineering marvel, the first trans-mountain highway of its kind. Before it was built there were a few miles of horse and wagon roads on either side of Glacier National Park, established in 1910, but this new road would connect the east and west sides of the park and cross the Continental Divide at Logan’s Pass. Two separate road construction crews worked each side of the mountain until they met in the middle. The most difficult portion of construction was the 405 foot east side tunnel. Because no power equipment could reach the site, laborers carried each piece of detonated rock out of the tunnel by hand. In 1932 the first automobile drove the entire 51 mile road officially opening the park to automobile traffic. The cost of the nearly three decade project was 2.5 million dollars. 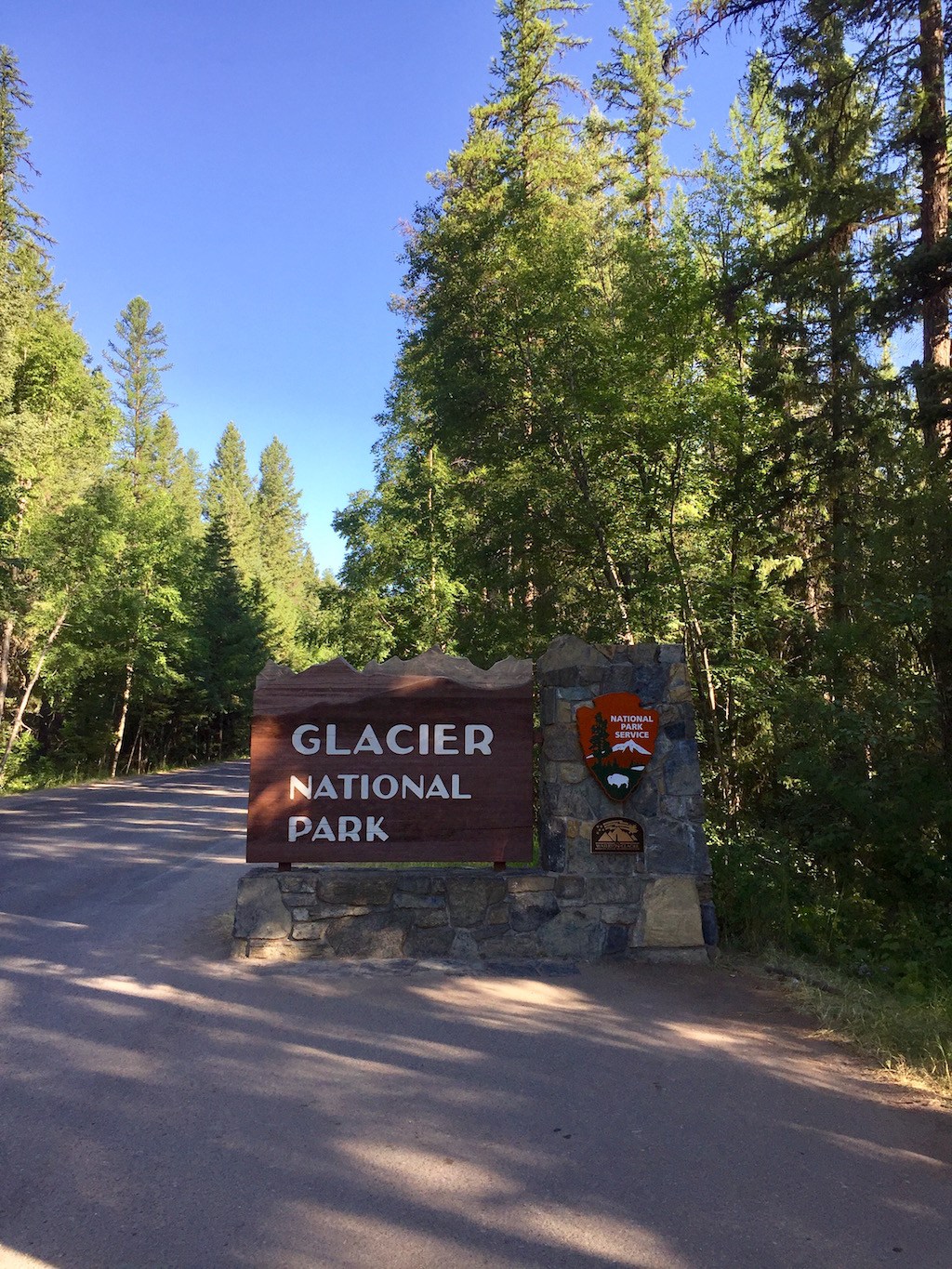 The full length of Going-to-the-Sun-Road is open for touring from around mid-June to early October each year depending on snow fall amounts. One area of the road east of Logan’s Pass is called the “Big Drift” where snow can get as deep as 80 feet and it is said to be the most difficult road in America to plow. The snow gets so deep that it requires heavy duty equipment that can move four thousand tons of snow per hour. Otherwise, it would never actually melt before the next season’s precipitation begins.. Even with that equipment, opening the road can take weeks once it’s accessible for plows. The latest opening recorded was July 13 in 2011. Yearly avalanches also destroy the limited guard rails, so the required repairs have to be completed before it is safe to let travelers traverse the narrow two lanes. 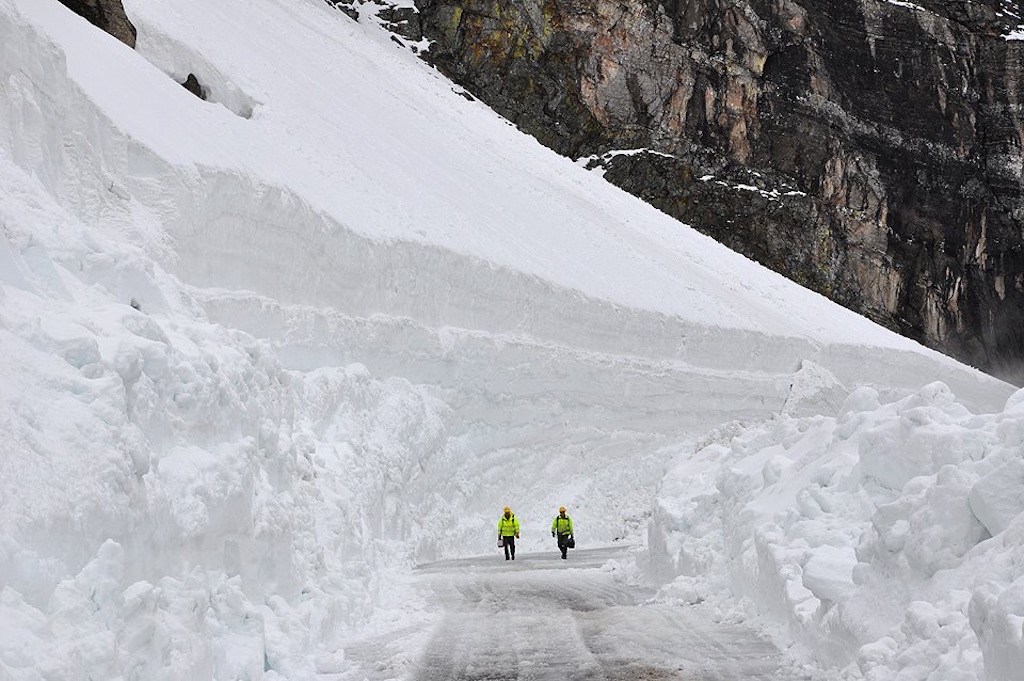 What makes Going-to-the-Sun-Road so popular that people cross the world to see it? In the short fifty miles of road, travelers experience shaded cedar and hemlock forests, wild flower covered meadows, towering glaciers, mountaintop alpine lakes, water covered rock walls, and deep green pine covered valleys. There are few areas where so many different types of terrain can be seen in a relatively short span of roadway.
When I made my way west over the summer I knew that although I would have limited time to take in the beauty and grandeur of Glacier I wanted to set aside one day for this drive. There are several options for taking it in. 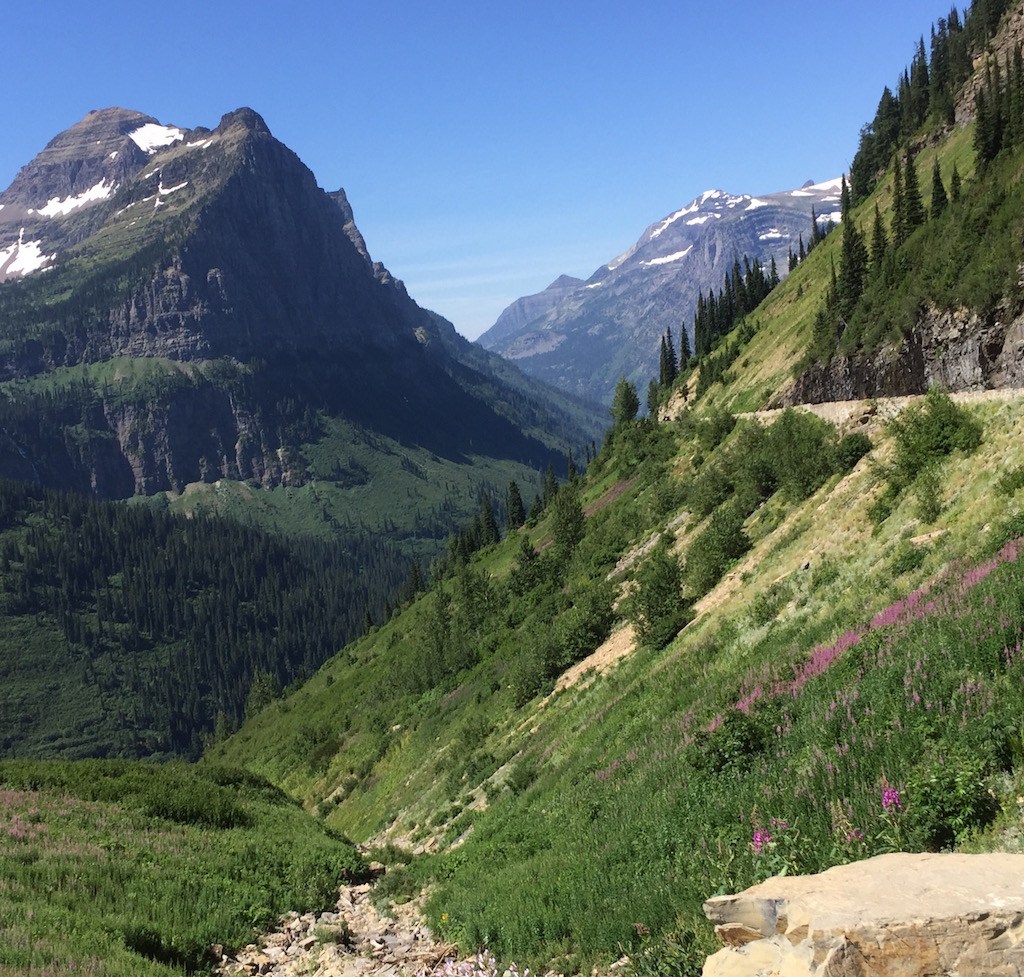 There is a free daily two way shuttle service offered by the Park Service that runs from early morning to late afternoon. There are no reservations for this shuttle and passengers are taken on a first come, first served basis. Once aboard the shuttle you will have to transfer to a different bus at Avalanche Camp, a fifty site campground within the park offering shady spots near the “Trail of the Cedars” and “Avalanche Lake” hiking trailheads. The free shuttle makes quick stops to load and unload passengers taking advantage of scenic overlooks, getting off at northern trailheads or having a picnic. Passengers must wait for the next bus to continue on and in the high summer months may have to wait for several buses before they get one with an open seat. A ride from the west side starting point at Apgar to St. Mary’s east side destination and back can take the entire day on the free shuttle. 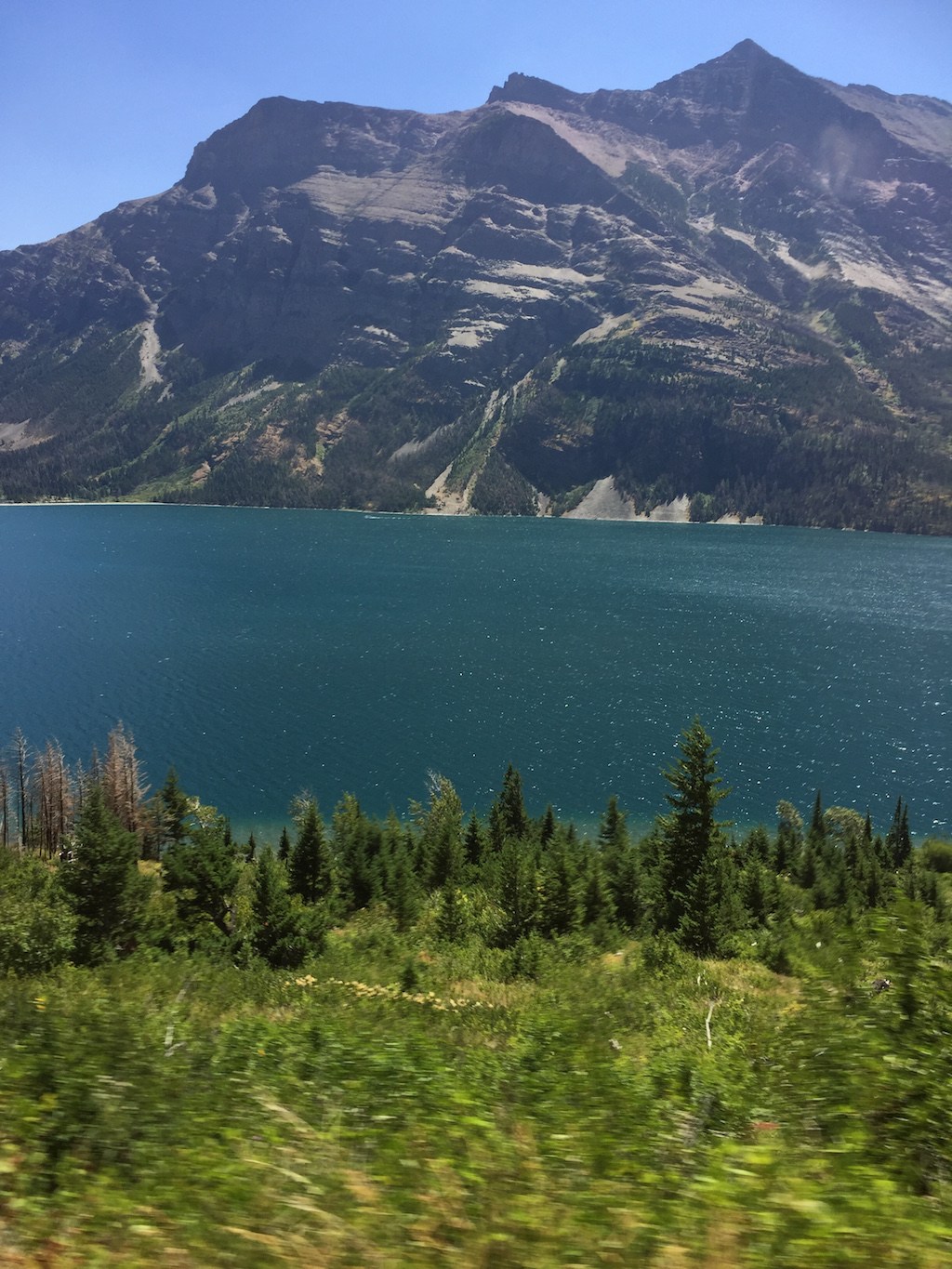 There is also the option of the traditional red buses that have been taking tourists through Glacier since the 1930’s. The beautifully restored buses have canvas roofs that retract to take advantage of the stunning vertical views. They seat 17 people, four in each row and one up front with the driver. If you are in the middle two seats of the bus you will not have the advantageous view but might feel a bit less unnerved by the steep drops. The bus driver acts as a tour guide and stops at the scenic overlooks along the fifty mile route. Unlike the free shuttle you are guaranteed a seat to continue the tour after a stop at the overlook. A full day round trip tour takes over eight hours and costs $96 for adults and $48 for children. The red bus tours sell out way in advance making reservations a must.

The last option is to drive yourself and I have to say that I don’t recommend it. The road is as narrow as eight feet in some areas with only knee high stone “guard rails” on much of the stretch. You need nerves of steel to navigate the steep grade, sharp curves and overhanging rocks that make up some of the drive. It would also be very hard, not to mention dangerous, to enjoy the view while driving. Several people who told me they chose this option also said that once they reached Logan’s Pass they were not able to find parking in order to get out and enjoy the sites. Parking is very limited at most of the overlooks as well. After reviewing our options we took the free shuttle and did not get out at any of the overlooks for fear of having to wait several hours for an available seat again. We were a party of four and the chances of a shuttle coming along with four open seats were slim. The free shuttle was a great ride and we had wonderful views from the large windows and a lovely tour driver who shared her experiences with us and made the ride very entertaining. 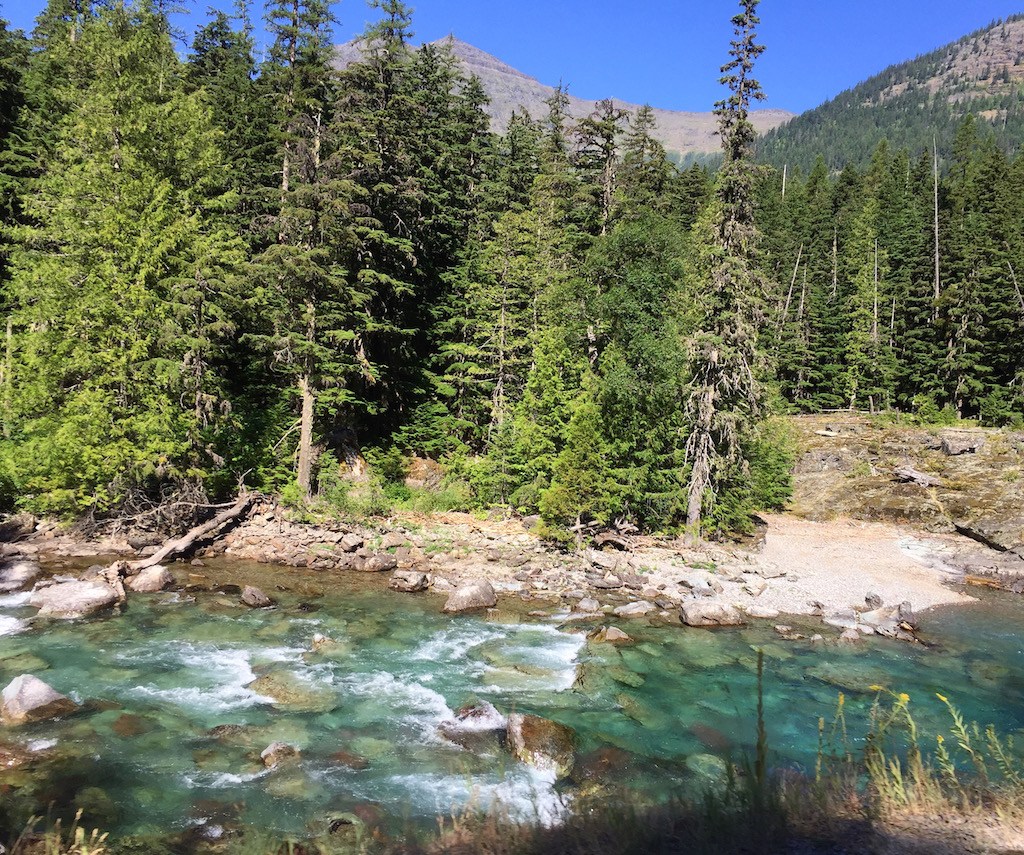 I recommend packing a lunch and your patience. Everywhere we stopped was crowded but people were pleasant and willing to wait for their turn at the lunch counters, gift shops and shuttle lines. If you are serious about photographing the incredible terrain the red bus is probably your best bet. You will want to get pictures of Bird Woman Falls, Wild Goose Island and the Weeping Wall. The red buses stop at all of the overlooks and I saw lots of serious camera gear and tripods being unloaded at these stops. Start your day early and plan on it taking the whole day. It’s not something you want to rush. Be prepared for changes in weather. Logan’s Pass is at an altitude of 6,200 feet and the wind can be biting. Lastly, prepare to be awed. I have driven the Pacific Coast Highway, the Blue Ridge Parkway in North Carolina, the White Mountain Trail in New Hampshire to name a few and have never seen anything as breathtaking as Going-to-the-Sun-Road. 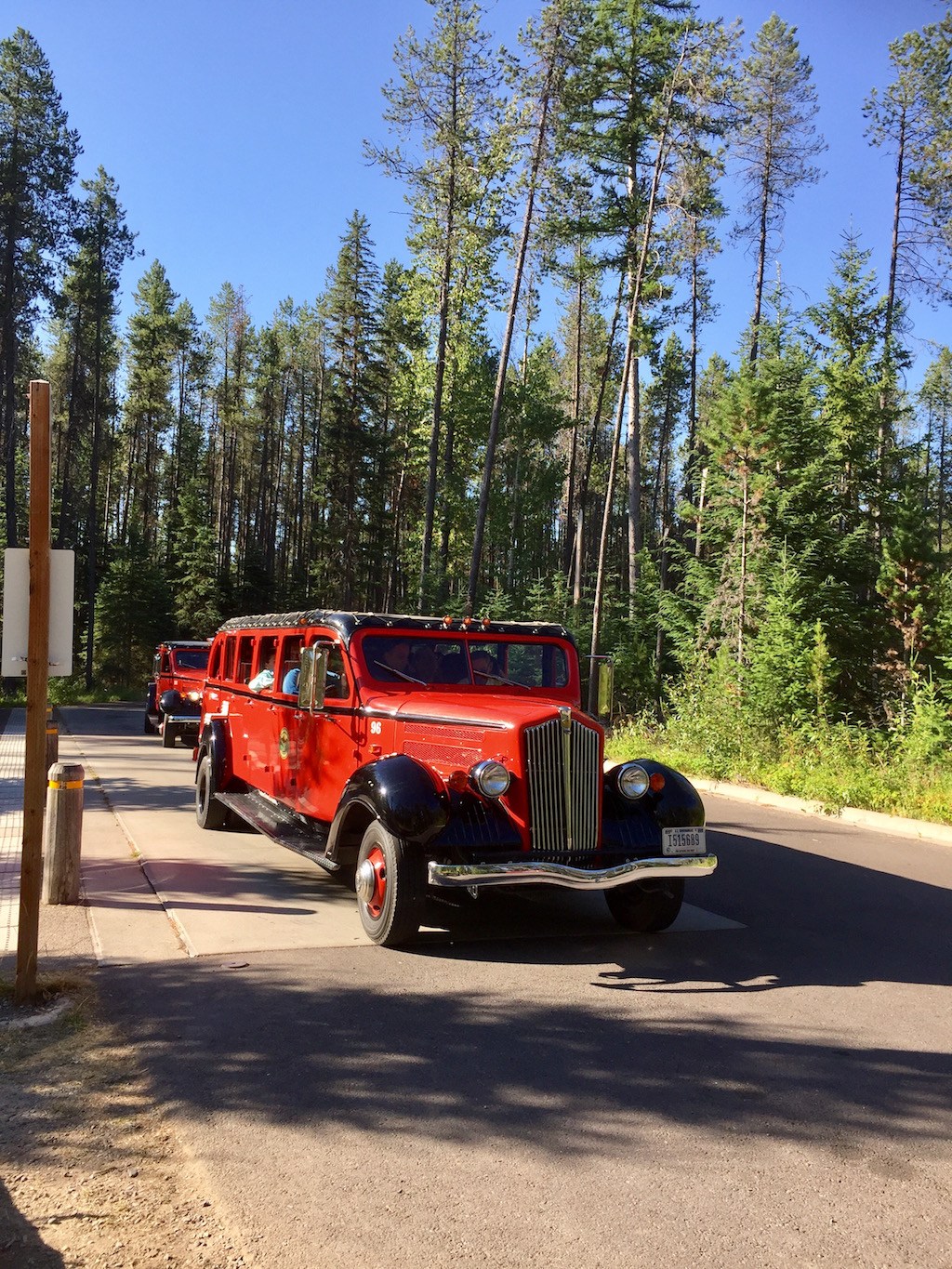 Some Other Great Scenic Drives I’ve Taken. Skyline Drive in Virginia – a 105 mile drive along the crest of the Blue Ridge Mountains in Shenandoah National Park. The Million Dollar Highway in Colorado – A beautiful pass through the San Juan Mountains between Ouray and Silverton reaching an elevation of 11 thousand feet. Moose Path Trail in New Hampshire – Take Route 16 North out of Gorham, NH for your best chance of spotting a moose and taking in the fall colors. Beartooth Highway in Wyoming – On your way out of Yellowstone follow the 38 mile road along rivers, foothills and Beartooth Lake. Appalachian Highlands Scenic Byway – 80 miles of byway that includes Lookout Mountain in the north to Alabama’s highest peak at Cheaha Mountain.